I like herbs. As in: very much. I have a lot of varying packages, boxes, glasses and tins in my kitchen. They are sitting there on their shelfes, filled to the brim with exotic, delicious, pungent, hot sour or spicy flavours. Waiting for me to let them do their magic. 😉

Don’t get me wrong: I like simple, down-to-earth dishes, which are not too pompous. But I like spices and I like it to make my own spice blends as staples.

To celebrate my new blog I chose to show you a beautiful spice blend from the thirteenth century Syrian cookbook (the author is unknown) “Scents and Flavors“* (“Al-Wusla ila ‘l-Habeeb”) in the translation von Charles Perry. (I’m afraid you will stumble a lot over Charles Perry in the coming months, because he is one of the leading experts in the domain I plan to invade with my work. 😅 He is a major contributor to the Oxford Symposium on Food and Cookery (I hope I can participate somtime in the future) and translated two of my most loved books – the more posh “Scents and Flavors” and “A Baghdad Cookery Book“*, the Kitâb al Tabîkh (The Book of Dishes) from Al Baghdadi.)

When you read the recipes in these old books, you find sometimes in the list of ingredients the description “mixed spices”. First I just wondered and tought that I might substitute this ominous mixed spices with my version of a wonderful spicy herb salt I made following the instructions in the Kitâb al Tabîkh. But then I found Charles Perrys insights in the glossary:

He points his readers to two recipes in Scents and Flavors. One (chapter 4.4.), which is very rich and with a lot of expensive ingedrients. And another one (c. 2.14), which is more restrained. He concludes that not all spices were obligatory and that the basic ingredrients would have been “merely ginger, cardamom and a bit of clove”. The unknown author of Scents and Flavors would use the spice blend in sweet beverages (as in oxymel for example) or in savoury dishes like chicken meatballs (chapter 5.17), persian turnips (c. 8.11) or fried cucumbers (c. 8.81).

I think Atraf al-tib was something like the more modern spice blend arabic Baharat (which translates simple to “spices”): You bought it by your favourite spice merchant or made your special version in your own kitchen. For my version I used all the basic ingedrients and added the herbs which I personally like a lot and had at hand. (At this point I made – based on my experiences with the Arabic kitchen – the wrong presumption and used rose petals instead of the more unsual rose hips. As you can see, I’m not the only one wondering if rose hips are really correct. But in hindsight: The more I think about it, the more it makes sort of sense. I’ve never seen rose hips in Arabic recipes before, but in germany they are used for “Hiffenmark” (a veeery special kind of jam) and they are often found in teas. They are really rich on vitamin c and taste very sour. I think they have a little similarity to sumak? So.. just try my fragrant version or substitute with 1 tsp of sumak or go forward with rose hips. I surely will try the latter and add my findings here. Sigh.. I’m not happy about this mistake, especially not in my first post. But I’m not ashamed. This is natural and part of the process of learning, self reflecting on assumptions and in it’s essence: research. )

Edit 11.10.2020:
After publishing this article I spoke with Urtatim Al-Qurtubiyya (SCA-name) and she pointed out, that other translators of this text – like Nawal Nasrallah, who wrote “Annals of the Caliphs’ Kitchens“* (translation of Al-Warraqs’s tenth century cookbook) and who is orginally from Iraqi – translates the ingredient as rose buds. Nasrallah also wrote “Delights From the Garden of Eden“*, a cookbook about the history or Iraqi Cuisine. And in the Glossary, filed under “Baharat” I found this:

So – phew! It’s really good to see that I wasn’t in the wrong and that I’m, in terms of the Baharat, on the same page with Nawal Nasrallah.

I don’t ground big amounts of spices in a mortar anymore – at least not when I am at home in my modern kitchen. 😁 I use an electric coffee grinder* with a detachable cup. Sorry to disappoint you – but your wrists will be thankful.

I strongly recommend to grind the spices fresh, it’s just a better aroma. The fragrance of freshly crushed cardamom seed is just matchless.
I used this mix of spices for vegetable dishes and dressings and – as a marinade with butter – for broiled chicken. As you can see – it turned out beautifully.

After grounding the herbs, put everything into a small bowl and mix it thoroughly.

Fill the mixture in a well shutting jar. That’s it.

A historian, cooking through continents and time. More about me. 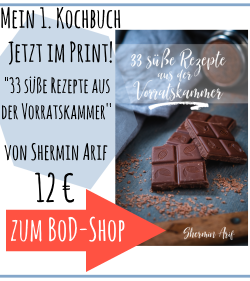